Aubameyang joined Borussia Dortmund in July 2013 and with BVB, won the 2013 DFL-Supercup. Aubameyang joined the A.C. Milan youth team in January 2007. In August, he was part of the squad that finished fourth in the inaugural Champions Youth Cup held in Malaysia and was awarded the Roberto Bettega Trophy for being the top scorer. He scored seven goals in six matches.For the 2008–09 season, Aubameyang was loaned out to Dijon FCO, in order to gain some first team experience. His performances there led him to appear in World Soccer's Talent Scout section in Summer 2009.

On 24 June 2009, it was announced Ligue 1 club Lille OSC had decided to sign Aubameyang on loan.
In the following season, he was loaned out again, this time to AS Monaco. On 21 August 2010, Aubameyang scored his first ever goal for Monaco in an away match versus RC Lens. He scored again on 29 August at home to AJ Auxerre where his Monaco team won 2–0.

In January 2011, after six months at Monaco, Aubameyang was loaned to AS Saint-Étienne until the end of the 2010–11 season. In July 2011, the loan was extended for the entire 2011–12 season. On 22 December 2011, Aubameyang signed with Saint-Étienne on a permanent deal. In February 2012, Aubameyang scored his first hat-trick against FC Lorient. In a warm up in a match against Olympique Lyonnais, he wore a £2,500 pair of swarovski crystals encrusted boots.

On 20 April 2013, Aubameyang was in the starting line-up for Saint-Étienne in the 2013 Coupe de la Ligue Final. Les Verts won the match 1–0 with a goal from Brandão to give Aubameyang his first major trophy as a professional footballer.

In the 2012–13 Ligue 1 season, Aubameyang ended second in the competition's top-goalscorers list with 19 goals. From his 37 appearances he also provided eight assists.

On 4 July 2013, Aubameyang joined Champions League finalists Borussia Dortmund on a five year contract. He made his competitive debut for his new club on 27 July 2013 against Bayern Munich in the DFL-Supercup, replacing Jakub Błaszczykowski in the second-half of Dortmund's 4–2 victory.

More information about Pierre-Emerick Aubameyang you can read HERE 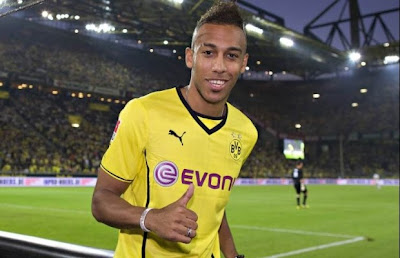 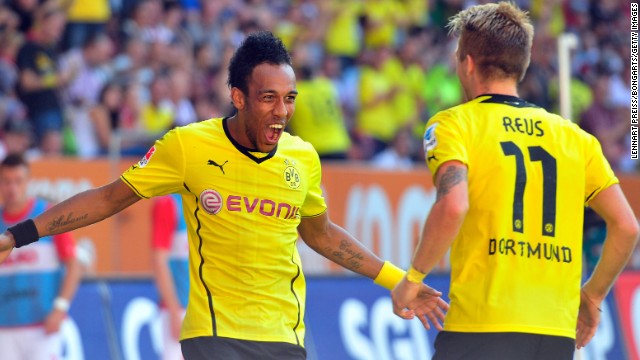