Everton , Muhamed Bešić , Premier League ,
Muhamed Bešić is a Bosnian professional footballer who plays for English club Everton and the Bosnia and Herzegovina national team as a defensive midfielder.

Born in Berlin to Bosniak parents, Bešić started playing for local club Tennis Borussia Berlin at age nine. He stayed until he was 16, when he signed for Hamburger SV. On 4 November 2010, Bešić extended his contract with Hamburg until 1 July 2013. After being named as a substitute in several matches in the 2010–11 season, he received his debut in the Bundesliga against Borussia Dortmund on 12 November. Bešić came on a substitute in the 80th minute when Dortmund was already leading 2–0. He started his first Bundesliga game against Borussia Mönchengladbach, and played all 90 minutes and they won 2–1.
In March 2012, Bešić was suspended from the first team, due to lack of discipline, Bosnian media also claimed that manager Torsten Fink "strangled" Bešić and threw him out of the dressing room.

On 28 July 2014 Bešić signed a five-year contract with Everton for a fee of £4 million. On his debut for Everton against Chelsea, he attempted a backheel on his very first touch of the ball, which was intercepted by an opponent and resulted in a goal. Two weeks later, he made his full Everton debut, starting in the Merseyside derby.

More about him: here 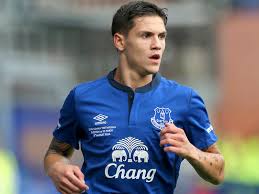